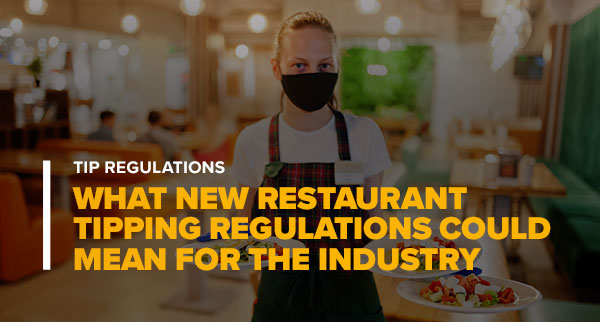 What New Restaurant Tipping Regulations could Mean for the Industry

The Department of Labor delayed the effective date for its Tip Regulations Under the Fair Labor Standards Act until April 30.

APRIL 12, 2021 - By Danny Klein - Published in FSR Magazine - Running background right now to a host of issues, from the increasingly difficult task to hire workers to deciphering the Restaurant Revitalization Fund, is the fate of the tip credit rule.

The Department of Labor delayed the effective date for its Tip Regulations Under the Fair Labor Standards Act until April 30 “in order to allow the Department the opportunity to review issues of law, policy, and fact raised by the 2020 Tip final rule before it takes effect.”

The DOL, in the same announcement, said other parts of the rule will have to wait longer—at least until December 31. It expects to withdraw and repurpose the parts of the Final tip rule addressing civil money penalties, willful violations, and the “managers or supervisors” language contained in the provision about employer retention of tips. So, for certain, none of those provisions will be included in the April change.

According to the DOL, “after considerable review,” several portions of the controversial 2020 Tip final rule implementing the 2018 Consolidated Appropriations Act will go into effect.

A prohibition on employers, including supervisors and managers, keeping tips received by workers, regardless of whether the employer takes a tip credit. This prohibition establishes significant protections for tipped employees, the DOL said.

The ability of an employer that does not take a tip credit to include non-tipped workers, such as cooks and dishwashers, in nontraditional tip-sharing agreements and, by doing so, boost their earnings.

The DOL proposed to extend further the effective date of three portions of the 2020 Tip final rule to December 31 (as noted). They are two portions that address the assessment of civil money penalties and the portion of the final rule that addresses the application of the FLSA tip credit to tipped employees who perform both tipped and non-tipped duties (dual jobs, for instance).

“Tipped workers are among those hardest hit amid the pandemic, and the Wage and Hour Division has made protecting these essential frontline workers a priority,” Wage and Hour Division Deputy Administrator Jessica Looman said in a statement “The proposals we announced today ensure that we consider all of the circumstances in today’s rapidly changing workplace. These essential workers deserve our careful and thoughtful consideration as we craft and implement rules that affect their well-being.”

For background, former President Donald Trump’s administration issued a final rule amending the Fair Labor Standards Act’s requirements for tipped workers, which was scheduled to take hold March 1. President Joe Biden asked to freeze proposed and pending regulations to give new leaders time to review pending changes. This is where the April 30 push comes in.

Under the current FLSA, restaurants and other hospitality employers may be eligible to take a tip credit. In other words, they can pay tipped workers less than standard minimum wage as long as workers’ tips make up the difference.

The Raise the Wage Act, which did not make it into the recent relief fund, proposed an increase of the federal minimum rate from $7.25 to $15 an hour over the next five years, starting at $9.50. But it also hiked the tipped wage from $2.13 to $4.95 and called to eliminate a separate minimum wage for tipped workers.

This raised concern with the National Restaurant Association, which said tipped servers make between $19–$25 per hour under the current tipped credit model, suggesting cutting it would actually hurt, not help workers. Federal law requires employees earn at least the federal minimum wage, or the higher state or local number in 28 states and 55 municipalities. Again, if the combination of the base wage and earned tips does not total the required minimum wage, the employer must pay the tipped employee more to make up the difference.

If the Raise the Wage Act went through as proposed, the Association said, restaurants would simply terminate tipping, raise prices to cover higher wages, and move to an hourly wage-only system. The result being tipped employees would end up earning less in the long run.

What’s center to the current debate is the prior administration’s rule, which codified DOL guidance eliminating the “80/20 rule.” This allowed restaurants to take a tip credit only for workers who spent no more than 20 percent of their time on non-tipped duties.

The rule would more broadly allow employers to take a tip credit when tipped employees perform related duties, like rolling silverware, either during, just before, or a “reasonable time” after tipped duties.

An issue taken here by some has been “the reasonable time” definition. Heidi Shierholz, a scholar at the Economic Policy Institute and former chief economist at the Labor Department under President Obama, told The Hill, “Reasonable time’ is not defined, and its ambiguity will make it difficult to enforce, providing employers an immense loophole and leaving workers behind.” She predicted the change could cost tipped workers a collective $700 million a year, and shift more jobs from non-tipped to tipped.

In another slice of the debate, back in December, Saru Jayaraman, executive director of One Fair Wage, a national nonprofit organization representing subminimum wage workers, said nearly 10 million tipped and other service workers lost their jobs since March. The majority of which, she added, were unable to access unemployment benefits through their states due to the fact they earned the subminimum wage for tipped workers. It remains $2.13 an hour at the federal level and $5 or less in nearly 40 states.

MORE ON THE WHAT THE CHANGE COULD MEAN FOR TIPPING

On January 19, eight states and the District of Columbia filed a lawsuit challenging the new rule. The suit claimed such a move would lower wages for tipped workers (as the Association suggested). It added the DOL didn’t adequately identify and weigh the costs and benefits of eliminating the 80/20 rule. In turn, the DOL arbitrarily eliminated it in violation of the Administrative Procedures Act.

As always, the conversation varies state by state. Some markets already require employers to pay tipped employees a minimum cash wage that is greater than that required by the FLSA. Others prohibit tip credits altogether.

When the rule was first announced, the Association praised the regulations as “a victory for the restaurant industry and its workers.” Meanwhile, labor advocates said they feared employers could manipulate the system by increasing back-house wages at the expense of front-house staff, and blur the lines between tipped and non-tipped work—forcing front-house employees to complete the latter while still getting paid at the $2.13 federal minimum tipped wage (in tip credit states) plus a percentage of the tip pool. This could also reduce the need for certain non-tipped positions, creating a situation that employees and labor advocates may view as unfair.

However, cutting-edge labor management technology can be used to mitigate the dispute by creating a more equal playing field, says Mark Heymann, co-founder/CEO of UniFocus.

Heymann chatted with FSR about the rule, the possibilities, and where restaurants can go from here.

The new proposed restaurant tipping regulations will now receive a final ruling from the U.S. Department of Labor on April 30. If they are passed, how will they impact the restaurant industry landscape?

There are several major changes that could come into effect. Employers will be prohibited from keeping tips earned by workers and sharing them with managers and supervisors, which is considered a win for common front-house and back-house employees. They can also establish non-traditional tipping pools that share tips with back-house employees (line cooks, dishwashers, janitorial, etc.) who typically earn less than servers, giving restaurants a way to spread more income equality across their staff without raising labor costs. And then there’s the elimination of the “80/20” rule, which mandated that employees earning a tipped minimum wage ($2.13) could only spend 20 percent of their shift performing non-tipped tasks—such as cleaning the restaurant, washing dishes or prepping food. Now, employers only need to abide by vague guidelines that allow servers to perform non-tipped tasks for “a reasonable time” during their shifts.

Those within the industry have disagreed about if these new regulations truly benefit both sides of the equation. Who will benefit more—employers or employees?

Well, employers certainly have the upper hand. It’s primarily an issue of fairness. Although the non-traditional gratuity pools are intended to raise wages for back-house staff members, it gives restaurants a way to do so at the expense of the server. When more staff members are added to the tip pool, everyone’s bottom lines are reduced. The extra $100 on the dishwasher’s paycheck is coming ostensibly out of the server’s pocket, not the restaurant’s labor spend. Meanwhile, in addition to seeing their paychecks decline, servers could also potentially be required to perform tasks without getting paid at the fair market rate. It’s estimated that the lack of an 80/20 rule could cost restaurant employees a combined $700 million annually.

So how can advanced technology solve the issue? Is there a way it can create an equal playing field for all parties involved?

Yes, that’s exactly it—a more equal playing field. The use of advanced technology like automated time and attendance systems will enable restaurants to still treat their employees fairly while capitalizing on the new regulations. An automated time and attendance system allows employees to adjust their wage designation during their shift based on the tasks they are performing. So, if a waiter spends two hours of his shift in the kitchen preparing food, the system will change his wage to a predetermined non-tipped wage for that time. Then, when he returns to the floor, he’s back at the tipped wage rate for the rest of his shift. The employee is compensated for the tasks performed, while the restaurant leverages cross-utilization to enhance efficiency without increasing labor costs. Technology can also be utilized to create fairer tip pools by adjusting the impact (skills needed) of certain jobs to the overall customer experience equation. Once this structure is established, the distribution process will be simplified, and everyone will transparently understand how final pay was determined.

How does workforce optimization come into the fold? Can that also play a role in establishing fairness?

From a workforce optimization standpoint, advanced technology will give restaurants the power to integrate flexible scheduling and shift durations into their non-traditional gratuity pools—a key for navigating peaks-and-valleys volatility. With flexible scheduling, they can create staffing structures that maximize profit margins during peaks in demand and minimize labor cost losses from the valleys. Employers can also utilize an advanced analytics system that leverages artificial intelligence to generate actionable data insights on future demand swings. Those insights will in turn enable them to integrate the right balance of tipped and non-tipped tasks, acting as a clear pathway for providing quality customer service at lower operational costs.

Are there any other important elements of the new regulations that should be considered?

A key element will be maintaining positive staff morale through a tip distribution process that is perceived to be fair and even-handed. If any party believes they are not being fairly treated or compensated, the potential ripple effects on a restaurant’s bottom line could be significant. The same can be said for clear, fair treatment of the entire team. Upon implementing the new regulations, restaurants should ensure team meetings are held and their organizational approach is understood by all. Employee engagement should be frequently monitored until the “dust” settles. 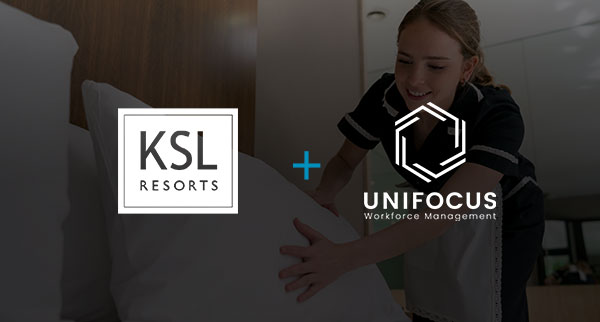 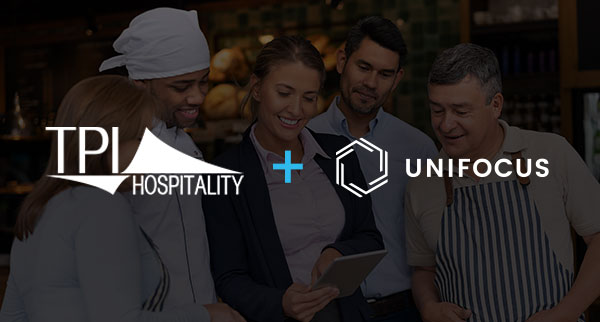